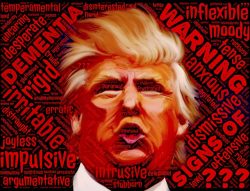 The structure of his sentences is often muddled, the meaning of his comments is sometimes unclear, and he has a tendency to waffle, repeat and exaggerate. His Twitter posts are also often littered with grammar mistakes.

President Trump’s language is annoying to some, and soothing to others. But for one group of professionals, it’s causing a big and sometime dangerous headache.

The structure of his sentences is often muddled, the meaning of his comments is sometimes unclear, and he has a tendency to waffle, repeat and exaggerate. His Twitter posts are also often littered with grammar mistakes. 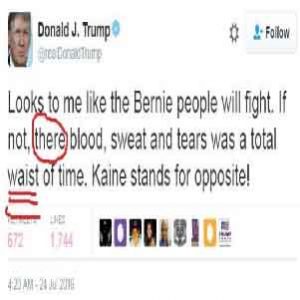 President Trump’s language is annoying to some, and soothing to others. But for one group of professionals, it’s causing a big and sometime dangerous headache.

If native English speakers are having difficulties processing Trump-speak, imagine the challenges facing foreign translators and interpreters, who must grapple with the president’s quips and sound bites and make them understandable in another language.

“There are several things that make things easier for interpreters,” said Christiane Abel, who teaches French translation and interpretation at the Middlebury Institute of International Studies at Monterey and is on the U.S. State Department’s list of contract interpreters. “When people finish their sentences … when the syntax is well-structured … when the speaker starts speaking and you kind of understand where the person is going, you can kind of decode the underlying thought.”

But this isn’t the case with Trump. The new leader of the free world is driving translators crazy. 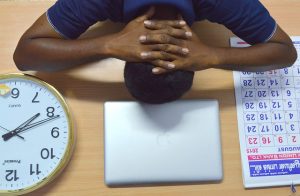 “He has kept the businessman personality he adopted during the ‘Apprentice’ TV show,” said Alessandro Duranti, former dean of the division of social sciences in the UCLA College of Letters and Science, whose expertise includes language as a cultural practice, and political discourse. “He has a certain use of hyperbole. He actually insults people. He calls people ‘dummy,’ ‘lowlife,’ ‘fraud.’ He talks in a way that is not the typical political speech. When there’s a choice, he goes for whatever is the most colloquial.”

And as a result, translating his speeches has become a minefield.

Examples of the issues facing translators and interpreters

Chinese interpreters struggle with Trump’s inclination toward hyperbole, according to Mandarin speakers. For example, “huge,” “enormous” and “tremendous” all translate into the same word in Chinese: “da,” or “big.”

“Sometimes the translation is much more restrained than the original because the words he chooses are very ostentatious,” said Yin Hao, a graduate student at the South China University of Technology in Guangzhou, who has made a hobby of translating comments by U.S. politicians and posting them online.

Weibo, China’s version of Twitter, increasingly fills with questions about the meaning of terms like “no nothing,” a reference to Trump’s tweet: “I HAVE NOTHING TO DO WITH RUSSIA – NO DEALS, NO LOANS, NO NOTHING!” 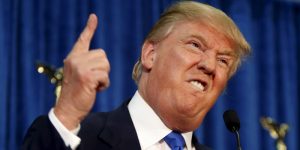 Duranti, the UCLA professor, noted that simple words and phrases such as “nice”  — which Trump uses frequently as a sort of exclamation — can be difficult to translate into other languages, because “it covers a huge semantic field.”

And take the phrase, “it bombed,” which Trump used in a Washington Post interview to describe Arnold Schwarzenegger’s low ratings when the former California governor debuted as host of “The New Celebrity Apprentice,” an updated version of the TV show Trump used to host.

The literal translation of the word “bombed” in Russian is “bombili” or “razbomlenni,” which means something has been destroyed by bombing.

David Quinto-Pozos, who directs the American Sign Language program at the University of Texas and is president of Mano a Mano, a national organization for Spanish-English-ASL interpreters, said that Trump’s use of terms such as “bad dudes” (“We have some protesters who are bad dudes, they have done bad things”) can cause challenges for signers.

“What is particularly challenging … is sometimes you get these words that you would not expect from someone who was running for president, was president-elect and is now president.”

There is also the question of register – determining the tone, decorum and feeling of what is being expressed. Simply put, some translators give Trump’s words a dignity and clarity that they might not have in English, because they can’t quite wrap their minds around a president who speaks the way he does.

“What we usually teach our students is that when you interpret in French you use a higher register in the language,” said Abel, the Middlebury Institute professor, who said at some stage her students would be trained to practice on Trump’s speeches.

“If you interpret word for word in French it’s going to sound really colloquial,” Abel added. For example, when rendering “good job,” you’re going to try to make it a bit more polished in French, such as “your performance has been excellent.”

So what’s the solution when translating and interpreting broken and often indecipherable sentences full of sarcasm and colloquialisms? Well it won’t come from a university textbook. One action that will help translators and interpreters would be to live or spend as much time as possible in the country of the language they translate from, in order to fully understand the specific ways in which locals talk to one another and to pick up new vocabulary and terms that do not export to other countries. The translator can then translate clearly back into their own language, and add a little explanation if necessary. However, when it comes to Trump, even this action will not fully protect them from being occasionally knocked off course by the President’s unpredictable, juvenile and sometimes vulgar discourse.