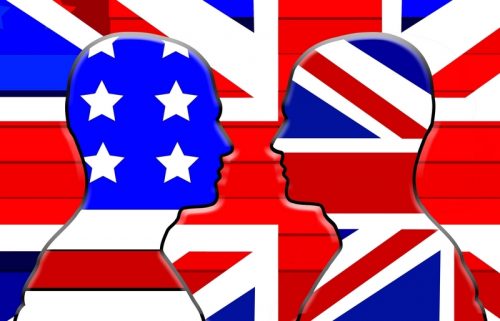 Brit: “Can we please stop the waffle* and get back to the main points of the meeting?“

American: “What do you mean? We already had breakfast!“

Today we are going to look at some of the differences between British and American English and how it can impact your business and communication.

Brit: “Can we please stop the waffle* and get back to the main points of the meeting?“

American: “What do you mean? We already had breakfast!“

Today we are going to look at some of the differences between British and American English and how it can impact your business and communication.

Communication and dialogue are key elements for successful business presentation, negotiation and agreement.  Being crystal clear on the requirements and perspectives of the other party are essential for reaching that win-win arrangement that we are looking for.  So, one would think that long as we are all doing business in English, we should not have any problems with communication?

Well not quite – it is important to distinguish between the many variations of English found in different countries, most notably British and American English.  Although both are the “English language”, there are very subtle differences between them that reflect the deep differences in history, cultural values and the present reality.  The differences becomes more significant when you are designing your written promotion strategy, for example, when answering the question “which style of English should I use for my website which is intended for the American market?”.

There is an old saying that Britain and America are “two nations divided by a common language” and this couldn’t be more true. Just because the two nations share a common language, it does not necessarily mean that they share the same business culture and practices.  Very often you may think that doing international business with a counterpart in English language will ease the complexity of the process, but in reality, it may only mask some significant underlying differences that may determine whether you succeed or fail in your mission.

To minimize the impact of the values and cultural differences in doing business in American and British English (and there too many to list in just one article), it is important to at least understand the basic differences in the language itself.  Having a good understanding of the main idiomatic differences will help bridge the cultural gap and improve the clarity of communication, which are key ingredients to a successful business transaction.

There are some key fundamental differences when it comes to vocabulary, “Do you have a fag to spare?” – I was quite surprised the first time I was asked this question.  To me, “fag” means a homosexual person, but in Britain, it means a cigarette.  Like this example, there are many such as “Vacation (American) / Holiday (British)”, “Scarf / Muffler”, “Sneakers / Trainers”, etc…

Although British and American spelling are very similar and should not be a challenge to be understood, using the proper spelling for the specific audience is important to show your professionalism and education level.  In general, the key differences are:

There are no significant grammar differences between British and American English that can lead to misunderstandings.  However, when dealing professionally in business situations, it is always to show your attention to detail and knowledge of the language.  One main grammatical difference is the choice of prepositions. For example, in British we would say “Monday to Friday” whereas in America it would be “Monday through Friday”.  There are some additional subtle differences such as the use of collective nouns (ie. My team “is” winning vs. My team “are” winning) and the use of past tense vs. present perfect (ie.  I “ate” too much vs. I’ve “eaten” too much)

Every group of people, small or large, will always have its differences and colloquialisms (colloquialism is a word or phrase that is not formal or literary, typically one that is used in ordinary or familiar conversation) are no exception.  However, this will be more important to keep in mind for verbal interactions since normally, colloquialisms would not be used in written format.  I will never forget the time when I was not able to find my colleague because he was on the “first floor”.  “First floor” in London it referred to the floor above street level and for me it was the street level.  Don’t let this happen to you too!

Some other typical daily colloquialisms are:

In summary, although both nations, Britain and America, have English as their national languages, there are many differences that can create confusion and misunderstandings.  The use of different vocabulary, spelling, grammar, and colloquialisms are daily and real challenges one person has when interacting with somebody who speaks the “other English”.  Knowing the basic differences between the two will help minimize the gaps and bring more clarity to communication when dealing with British and American English.  Your future business discussions in English will be much clearer if you keep these differences in mind.

Hospitality and the Need for High Quality Content – HI-COM

What Languages Should You Translate Your Blockchain Documents to in 2021?

Certified Translation in China: 21 Cases when You Need It – HI-COM