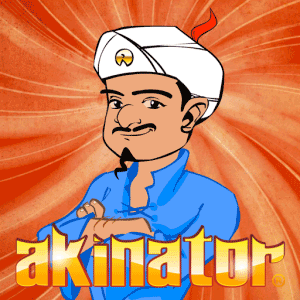 The famous Genie is hungry for a new challenge. To help him, go in search for Akinator…

Akinator can read your mind and tell you exactly what character you are thinking about, just by asking a few questions. Think of a real or fictional character and the genius will try to guess who it is. Will you dare challenge the mind skills of the Genie?

Akinator is a video game and mobile application made by French company Elokence which launched in 2007. Elokence started its adventure in 2006 with the creation of a small website where a small IA can guess a character. In 2007 they launch their game Akinator. During the game, the Akinator genie tries to determine which fictional or real “character” the player is thinking about, asking a series of questions.The program uses an artificial intelligence program that is based on the best questions to ask through its experience with other players. The game became famous in Europe in 2009 and Japan in 2010 with the launch of the mobile version by Scimob, which broke records on the App Store. Since October 2017, Akinator has been available on Google Home and Alexa.

HI-COM helped Elokence localize its game and we ensured that the work we provided met the requirements of the local Chinese market, allowing our client to seize new opportunities in Asia.
The localization included the adaptation of the language, but also of the way the questions are asked as well as the addition of new relevant questions, new local characters and the re-adaptation of the game according to government regulations.

We are a partner of AKINATOR in CHINA. For more information, please visit: http://cn.akinator.com/