Game localization and its difficulties. Since 2012, the video game industry, driven by a dynamic and rapidly growing market, has silently taken over the global entertainment industry. Today, the combined revenue of the movie and music industry worldwide doesn’t even match half the revenue of the gaming industry.

A short history of video games

The history of video games goes back to the 40’s. Indeed, the first video games were developed in the 1940s. But, it wasn’t until 1971 that the first commercially available arcade video game, “Computer Space by Nutting Associates” launched video games into the public consciousness. Today, gaming localization is no longer an option in today’s constantly growing global markets.

Video gaming saw a rise in popularity in the 1980s but the video game crash of 1983 left many questioning the commercial viability of the fledgling industry. This led to a shift in focus towards personal computer video gaming. However, this did not deter the historic release of the NES (Nintendo Entertainment System) and Super Mario Bros on the game console market in 1985.

9 years later, after a breakdown in a deal with Nintendo, Sony launched the PlayStation, a CD-based console with support for early 3D graphics. At the turn of the millennium, Microsoft launched the Xbox while Nintendo launched the GameCube, the GameBoy and the DS. Last June, during the Microsoft/Xbox E3 conference, the inauguration of the “Xbox Scarlett” console ushered in the 9th generation of consoles.

With a Western gaming market that is still mainly console and PC based versus a Chinese market that is more mobile-based, we are beginning to see the growing importance of gaming localization. 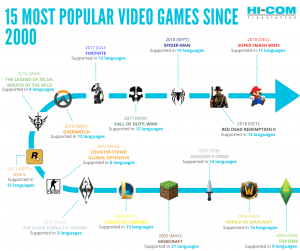 Since 2012, the video game industry, driven by a dynamic and rapidly growing market, has silently taken over the global entertainment industry. Today, the combined revenue of the movie and music industry worldwide doesn’t even match half the revenue of the gaming industry.

The gaming market is currently spread out onto 3 platforms:

What is game localization?

Localizing games is more than just translating text. It involves quality assurances, testing the integration of the translated text and adapting to the cultural and legal mores of the specific region. The specifics can vary from country to country.  For example, in Australia alcohol and drugs cannot be shown in video games. Whilst countries such as China don’t allow blood, skulls or any religious symbolism.

Comedian Kumail Najiani revealed Call of Duty’s recent mishap, where the famous video game used the wrong national language for its location in Karachi, Pakistan, showing Arabic signs rather than Urdu signs. For a video game that took 3 years to make, this blunder highlights the importance of research and localizing

Having your video games available in just one language is no longer an option in today’s global markets. Video game localization and/or translation into other languages is often essential for many reasons, most importantly:

The most important aims of game localization translation are to:

All about Game localization Services! 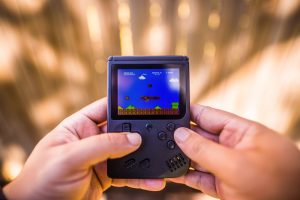 3 game localization problems that we fixed

In one of the Kitchen games, there was a recipe called “French Fries” in the English version of the game. During the process of game localization for Belgium, “French fries” had to become “Belgium Fries” for the Belgium version, as Belgians consider it their invention. We also had to change the art for the fries to remove the ketchup that showed up with the “Belgium Fries” because there were so many complaints from Belgium players that it didn’t make sense.

There was also a winemaking mission in the Kitchen game. However, since winemaking/alcohol is culturally taboo in Arabic regions, the Arabic game localization team had to re-write the whole story into a fruit juice festival. We had same issue regarding the story of a couple being gay in the game, which in the Western world is now socially acceptable. The Arabic localization team had to rewrite it into a friendship.

In Chinese, [I want to go here] is [我想去这里]. The English translation, [I want to go here] is how it should be translated, but it would exceed the space and look messy. The length of English is 2.3 times longer than Chinese to express the same meaning. So, our game localization specialists changed it to be [I want to go]. When the starting language is Chinese, there is always an issue because Chinese script is shorter than most other languages in expressing the same message, while Russian script is the longest. So, for CN->Russian game localization, we always have to ensure the translator has enough experience localizing for Russian, as Russian script is 4 times longer than Chinese. They need to be proficient at concise translations.

Game Localization specialists need to not only be good at translation but also have a deep understanding of both cultures to provide feedback and guidelines.

Game localization jobs also require you to be very sensitive to the length of the text, as fitting in the translated text to the UI can be a challenge. While for usual translations, translators must guarantee translation accuracy, gaming localization translators also need to be aware of the UI length and the limits.

Know more about the types of video games HI-COM’s team has experience in translating here.

Interview with our game localization expert Sam A.

I think the cultural background of the translator is really important for game localization.

Tell us about your background and how you became a video game localization expert.

I was an in-house game localization specialist at a mobile game development company. Before this, I was doing freelance translation for quite a long time, which paid off all my tuition. Back when I started, there weren’t many mobile games, so I was an outsourced translator for the Steam games. It was easier when it was for the PC games because UI text length limit was less of an issue for the PC. When I moved on to mobile games, due to small phone screen sizes, UI limits became an important issue. So, I had to struggle with this for quite a long time.

Tell us about the game localization project you recently did (for HI-COM), with general details.

It was for an Otaku game made in China. You can grow your own pets and go around collecting them, a bit like Pokemon. Today the most popular type of games in China are the Otaku games and female-oriented games.

Otaku style games made in China are one of the worst to translate because both China and Japan use Chinese characters (Kanji in Japanese). In China, they take Kanji and read it in Chinese. While the original text sounds Chinese, it’s actually words and phrases imported from Japanese.

Right now, we are working on female target games. Female oriented games are difficult because female-oriented games touch on feminist issues, a divisive topic. The acceptance level of the feminist movement is different across different age brackets in the same country. So, the game localization manager has to take this into account. If the target audience is younger, they are sensitive to feminist issues, whereas older female audiences don’t really care for it.

How does game localization work?

Just before this interview, I was going through this process, changing the translation for the word【袜子】. This word is Chinese for socks. If you see it in the text 袜子=socks is technically correct. After putting this text in the game, I found out that 【袜子】shows up with the picture of traditional Korean socks, which has a different name in Chinese. Normally we use 【袜子】 for Western socks because that’s what everyone wears.

What are the tools do you use on daily work life?

I personally prefer Trados as a translation/game localization tool because my background is in EN->KO translation. But after working in China I found out that for CN to other Asian languages, MemoQ is more common. Recently, Baidu came out with their own tool for game localization, which a lot of my clients are using. They say this tool is easier for the managers on Manama projects. Nevertheless, I hear lots of complaints from translators that this tool is not translator friendly.

Do you have self-organization tips for yourself and your team to succeed in a game localization project?

I think the cultural background of the translator is really important for game localization. For game localization jobs, specialists need to understand the mindset of the reader. As game localization require invasive changes to the content, specialists need to be able to justify their opinions clearly. Also, they must be a gamer, as gaming vernacular changes so fast. If they don’t game, it will be very difficult to stay on top of the latest slang and terms. Reviewing is an integral part of a game localization expert’s job. If they are not experienced, they will get stuck in dungeons and take forever to actually review their translations. So, the ability to beat the game fast has a huge impact on their work efficiency.

HI-COM is a multilingual translation agency dedicated to providing professional translation services to businesses around the world.

localization
Kate CHERNAVINAWhat you need to know about game localization in 2020 – HI-COM03.12.2020

Translate a website to Chinese: all you need to know in 2020!

Discover how localisation can impact your SEO ranking