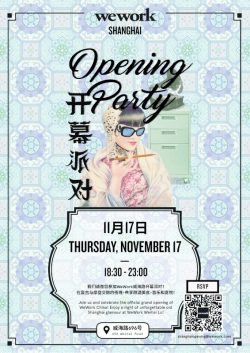 WeWork opened their flagship store last week and held a big party in their office. It is located in Weihai Road, in a 100-year old building that can accomodate approximately 1300 seats. They are also expecting 3 more new locations (2 in Beijing and 1 in Shanghai) by 2017.

The first Wework opened in 2010 in New York and they came to join the chinese market in 2016 by opening its first location on Yanping road, Jing’an District, Shanghai. According to the company, the whole space in their first office is filled in 30 days of its opening. Also, to accelerate its China growth, they have established a partnership with Sino-Ocean Group, one of the local market expert in real estate in China.

They also offer “We Membership” that would let you access to their digital member network, events, and services. Check them out at www.wework.com!