As some of you will know,  Facebook has a feature that enables public content from any page on its platform to be translated into the user’s chosen language. Up until 2015 this feature was powered by the Bing Translator engine. Despite it being available on Facebook and other social media such as Twitter for around five years, users continued to report major issues regarding the accuracy of these translations. Facebook has since implemented its own machine learning translation system. Is progress being made? Let’s find out!

Machine learning is accomplishing Facebook’s mission of connecting the world across language barriers. Facebook is now serving 2 billion text translations per day. Facebook can translate across 40 languages in 1,800 directions. And around 800 million users, almost half of all Facebook users, see translations each month. This is achieved thanks to Facebook’s own machine learning translation technology, which it now uses exclusively after finally cutting ties with Bing in 2015.

If you haven’t already tried it, all you need to do is tap the “See Translation” button on your Facebook posts, and machine learning AI will instantly show you the foreign text in your language

But does it actually work?

One major issue is that the type of language users publish on Facebook is usually full of slang or colloquial terms, spelling, grammar or punctuation mistakes. Issues such as these will not make it easy for Facebook’s technology  to produce high quality precise translations.

To prove this, a recent study showed that after running over a hundred Facebook posts and Tweets in French containing colloquial terms through the software, only 30% percent of them were translated correctly into English. 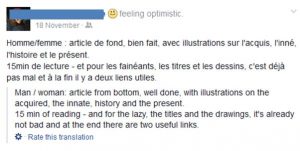 While anyone with just a few grains of intelligence can get the gist of this fractured translation, there are obvious flaws in the French to English translation that are worth noting. For example, ‘article de fond’ has been translated so literally, that none of its meaning is carried over into the English. So it’s not so pretty, and definitely not accurate.

So is it a big issue?

Most people will say that these types of inaccuracies aren’t much of a hassle for them. As long as they get a basic understanding of the translation, they’re good to go. From a personal point of view, I somewhat agree with this sentiment, however I feel users should be careful when using this service, as misunderstandings can, and will arise. It is important not to fully trust the translation provided, and if you have any doubts, ask a native speaker of the language concerned or have the text translated by a professional agency, particularly if you are considering using the translations for legal purposes.

What do you think? Should Facebook be looking at other options when it comes to translating public content on the platform? Is it acceptable for a company as big as Facebook to use technology that’s not fully accurate? Let us know in the comments below.

Machine Translations Translation
Kate CHERNAVINAFacebook and its pursuit of the perfect machine translation12.18.2016

Expanding your business abroad? Discover the importance of a specialized translation! HI-COM